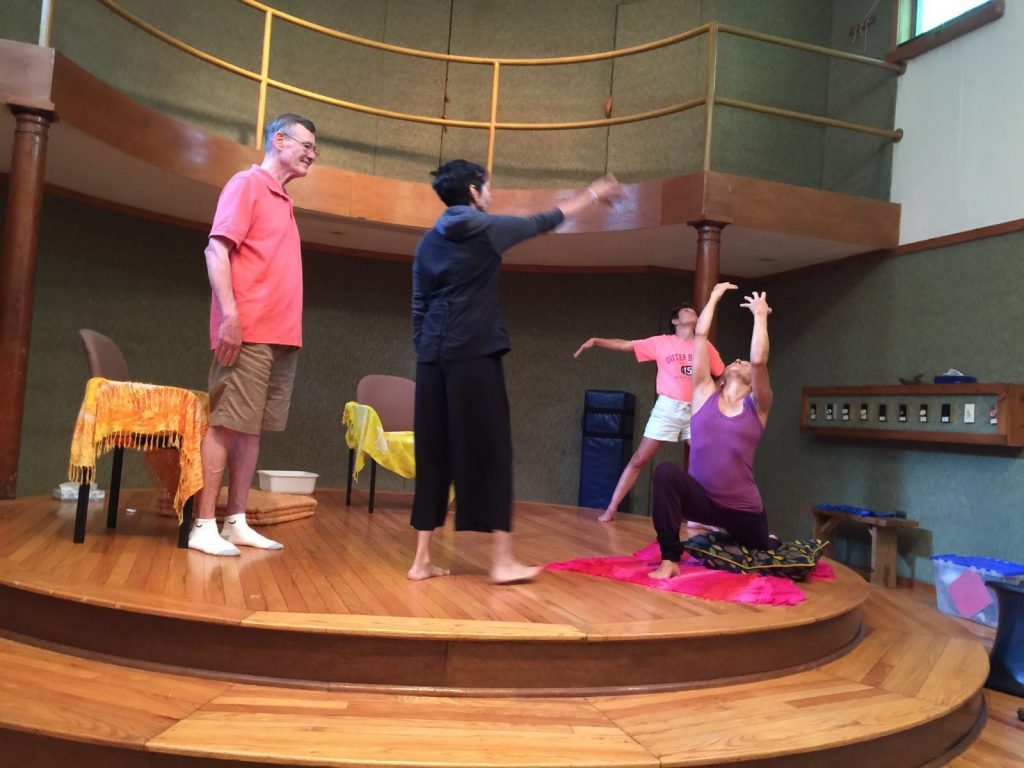 As I mentioned in my first article, the phrase,”reverse roles” was very much what I heard at my first psychodrama workshop. As this was uttered by the group leader, two people on the stage switched places and began playing the opposite role.

Â “This is it! “, I thought as I began to think of how I could use it in my work. Get people to reverse roles and voila! Well I was sorely mistaken those many years ago. As I began to explore this fascinating form of group work I discovered several techniques that are used in Psychodrama. Here are two key techniques used and an example of how I used them.Â

Here the Protagonist says a few words in the role of a particular ‘character’ or entity in their drama. The Auxiliary then says these lines to the Protagonist who is in the complimentary role.Â

In this technique, objects and people are used to represent the scenario the Protagonist wishes to explore.

Ken is aged 19, and has a serious problem with drugs and alcohol which he has managed to stop after going to the alcohol treatment centre.Â He had just come out of Rehab in the United Kingdom and was brought to my practice by his concerned father.Â His father has tried very hard to help him over the years and has now brought Ken to us at Promises. Ken is worried about going out for dinner with his Father and a family Friend, whom we shall call Andy, because he might be tempted to drink again.

I encourage him to enact a scene at dinner with his father and Andy, playing out what he expects to happen.Â He sets out the chairs and chooses two people in the group to be his Father and Andy. As he greets the two older men rather lethargically, his shoulders slouch and he speaks in a flat voice.

Reversing roles, Ken now plays the part of Andy. He perks up now, smiling and full of energy. â€˜Andyâ€™ says, â€œThe last time I saw you Ken, you were a small boy. My how youâ€™ve grown!â€ Playing the role of his tempter, he urges Ken to â€œhave a drink now as a real manâ€ holding a glass towards him.

Back to being himself after another role reversalÂ Kenâ€™sÂ face reddens and he clenches his fists in agitation. Â He speaks to me as the Director, saying that he is afraid he might have a relapse. I immediately ask him to take on the role of his father.

As his father, he sits with his arms crossed and says through clenched teeth,Â â€œItâ€™s Ok, you donâ€™t have to drink. I donâ€™t want to cause a relapse.â€ As himself, Ken is at a loss for words. I ask the other audience members to do some modeling and try different responses in the role of Ken as he watches.

Ken cheers up as he sees the other group members rising to the occasion. Everyone is animated as they get a chance to act the part and try to tell Andy off. There is much laughter and hilarity as people do and say whatever they think might work.Â A sort of role training session is underway.

Ken is noticeably inspired by the group andÂ heÂ chooses one response. He stands tall with a cheeky smile and says to Andy, â€œIâ€™m not drinking today, and I wonder why you are so determined to force alcohol on me!â€ Â In role reversal as Andy, he changes the subject and backs down, no longer the magnanimous host. The drama ends. Ken is no longer a deflated doomsday worry wart. Instead he is positive about going out for dinner and knows what he can do later that night at dinner.Â The group has come to his aid and I once again marvel at the magic of Psychodrama.

In future articles, I shall illustrate more psychodrama techniques with dramas I have directed. It continues to be a privilege to be allowed into the lives of group members and I am continually amazed at the transformations that happen. 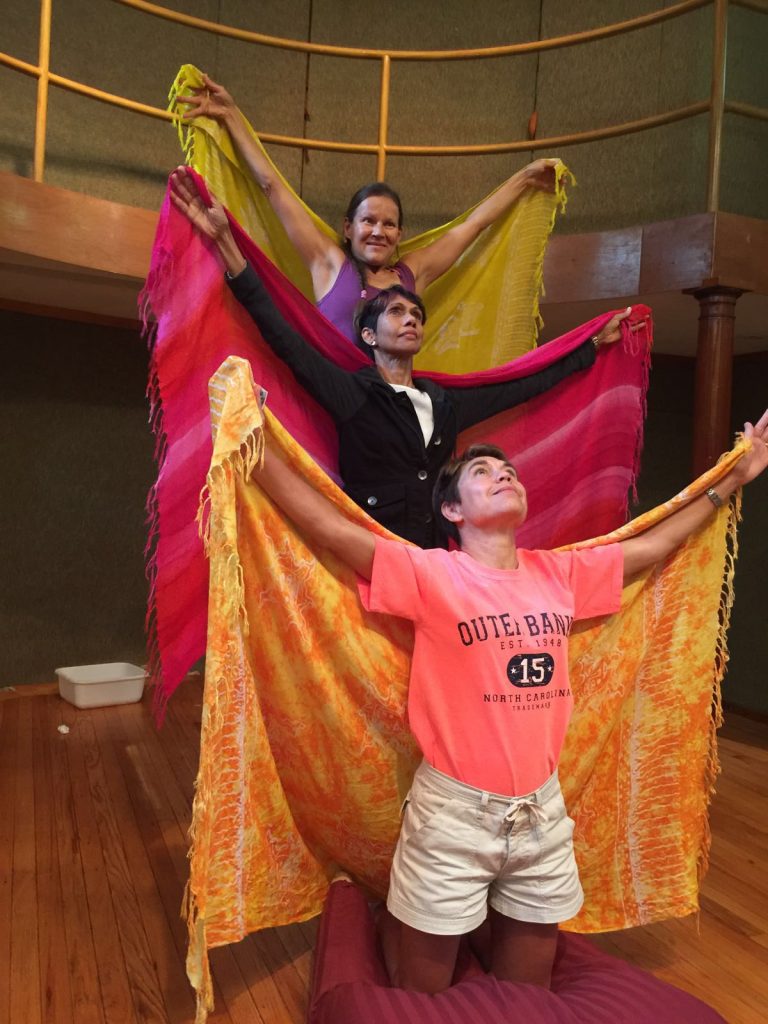 This is the first in a series of articles about the Action Method of Psychodrama by Sharmini Winslow.

“Reverse roles!”, the group leader shouted, and two people switched roles on stage and began enacting the opposite part. I was in the middle of my first Psychodrama workshop and all seemed chaotic and yet pleasantly therapeutic. What was going on? My desire to explore psychodrama had brought me here to a large room with a group leader and several very friendly people. Soon I was learning the ropes and I tried to make sense of things. 7 years later, I am still held captive by the magic of psychodrama.

Often people ask me,”what is Psychodrama?”, and I ask if they have 10 minutes to listen. It is a therapeutic action method that usually is done in groups. So here is a short description that will suffice for now.

Psychodrama, is the brainchild of Dr J.L. Moreno. It comes from two words, Psycho and drama. Psycho (not like in the movie where someone slashes you in the shower with a knife), is derived from the word â€˜psycheâ€™ which means the mental or psychological structure of a person. Drama refers to the enactment or action that happens in the session.

There are 5 instruments in Psychodrama

In the group, the therapist or group leader takes on this role and keeps the action flowing and gives structure to what evolves on the stage.

This can be any space set aside for the enactments to occur. In a group, the stage is the space apart from where group members are seated. Moreno built a stage in New York specifically for psychodrama which had the audience seated at a different level. I had the privilege of directing a drama on the original stage.

These are the group members who are not involved in the drama but who act as witnesses and can respond to the action on stage as a normal audience would, often yelling encouragement to the protagonist.

This is the person who represents the main concerns of the group. Usually chosen by the group, the Protagonist gets to put into action a concern, a challenge or an event that they would like to have turned out differently. In psychodrama, past, future and present can coexist in the Here and Now.

The Auxiliary or sometimes called the Auxiliary Ego is the group member chosen to be a certain element or person in the drama, for example the protagonist’s Sister or maybe their addiction.

Each session has a warm up, an enactment phase and time for sharing. In the sharing segment, group members get to share something about their own lives that is connected to the drama.

So in Psychodrama the protagonist’s inner world gets “‘concretized”Â or made real, and the Director helps the Protagonist explore and work spontaneously to create new ways of being that are more helpful in living with whatever challenge was enacted. New perspectives are discovered; insights and conclusions made that bring healing and newness. The Protagonist and group members experience the wonder of being spontaneous and are positively energized!

*Psychodrama is used in group sessions run by Sharmini as part of her practice at Promises. 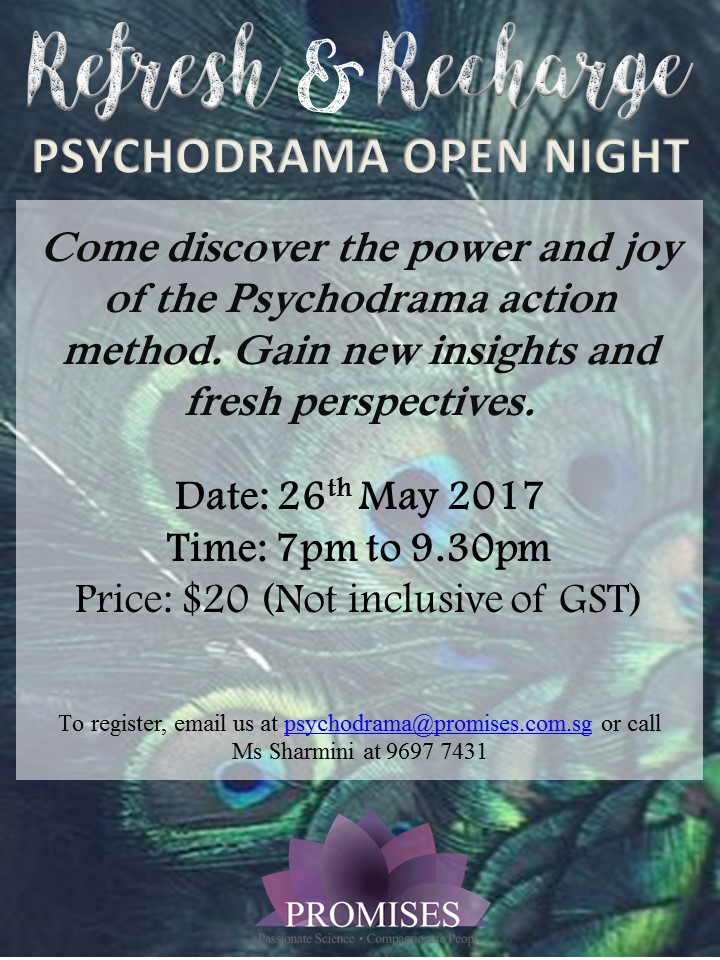 The next psychodrama open night happening soon in May!!! Email or call for more details. Information is on the flyer below. Hope to see you!

Sociodrama is a natural, powerful and playful method for helping children developÂ problem solving skills and try out new behaviors and roles. It helps children
learn how to self-regulate and develop impulse control as well as to safely and appropriately express strong feelings. Â Read More…

Psychodrama is for everyone and anyone who would like to experience the spontaneity and â€˜magicâ€™ of working with action methods.

Whether your focus is personal, professional, therapy or training, if youâ€™re interested in the creative exploration of yourself, your relationships and your life using action as well as words, then you might value and enjoy the psychodramatic method and the personal liberations, self expression and insights that it elicits.